I was so excited to have Eran travel to Argentina with me because of the bond I have with this country who gave me a home for almost six years. Although he visited Venezuela last December, the situation in my birth country was not the best to have visitors. The excitement of taking him to places I used to go, or introducing him to friends wasn’t possible. Simply because almost everybody has left and the places I knew only exist in my memory now. So, Argentina fulfilled that dream of showing him all my places and meeting the friends who were part of my porteña life.

We planned the trip to attend my friend’s wedding and from there on I drafted my list of things to do, places to visit, and of course, where to eat! We arrived a day before the wedding and got to our base, Cata’s apartment. Cata was just coming back from a trip to Israel and literally landed 20 minutes before us, so she was waiting for us at the airport to catch a taxi home.

This was Eran’s first “latin” wedding so I was very eager to see his reaction to an Argentinian wedding coming from Israel where they really know how to party at weddings. Caro and Victor’s wedding was outside of the city so we had to take a shuttle to get there, it was about an hour and a half drive so we left at 3pm. 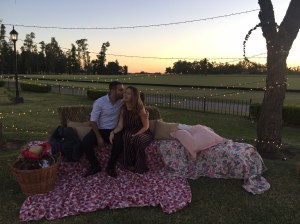 The ceremony was beautiful! Imagine a large green field, with nothing but a house in the middle ( where the party was held) and the beautiful sunset colors as the background. The party was so much fun. We ate, danced, and drank surviving an almost 12-hour wedding, or as Eran would say: the longest wedding I’ve ever attended ( we got back home around 3am). It was a great start to the trip.

Before we arrived, I had been moving all my connections to find tickets to a “clásico”. Either a Boca – River or a Boca/River something. Dios mio, I lived in Argentina many years and had never tried to attend one of these games, so had no idea how hard it was to find tickets. Either you simply don’t find any, or you have to pay minimum USD $250 to buy a tourist package. And by package I mean: the ticket, the shuttle to the field, and a translator— because you’re going to need translation during the game of course (?).

In the meanwhile, we continued our Argentina to-do list. What is another thing you must do when visiting this country? Well, tango of course. Cata has been taking classes for a while and invited us to her class, so we decided to make it a group activity.  My two nephews who now live in Buenos Aires joined us for a tango 101 class in a small local club in Palermo, Café Vinilo. What’s great about these type of places is that it’s not a tourist spot, it’s mostly attended by locals and after the class, it becomes a real milonga where people spend hours dancing.

I was late with the tango experience, I never took a class when I lived in Argentina, so tried it for the first time during my visits after moving to San Francisco. It’s hard for me because being Venezuelan, I’m used to moving my hips ( a lot) when dancing, so tango for me is a big effort to keep the movement just at the feet. I thought that Eran, who is not big on dancing, could do well since it doesn’t require as much rhythm as salsa or merengue. But again, do not trick yourself, tango is not easy! We completed the basic steps and then went into the actual dancing with our couples. We thought we were doing really well, but after looking at a video they took of us, we couldn’t stop laughing at how we looked more like swing dancers than tango dancers! Let’s just stick to salsa we said.

After many days of going back and forth looking for soccer tickets, I found them! We found for the second derby, Racing – Independiente. We were going to Avellaneda. Racing has always been my sentimental team, I always admired the level of loyalty and passion that Racing fans have for their team, it’s just incredible. They are almost last in their division, but the fans love them no matter what. We got good tickets, thanks to the man who was behind us in the purchase line, who made sure we sat exactly where you could see everything. We took an Uber to the stadium, and the driver —guess what— was a Racing fan. All signs were looking good for the local team, and I was convinced we’d bring them luck. Aguante Racing!! 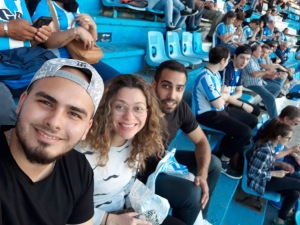 The pregame was AMAZING. I’ve been to a couple of soccer games, mostly the American Cup to watch Venezuela or Argentina. But I had never been to a local game. This was a different level of everything. The people jumping, singing, adults, children, men and women, the stadium all covered in blue ( Racing’s jersey color), was incredible. Eran and Edgar who are big soccer fans were also in awe. And then the game started. Racing did not make any goals, they had several attempts, but Independiente got lucky and scored. Despite the sad outcome, the Guardia Imperial never stopped chanting, never.

The last “big” item on my to-do list was Patagonia, specifically Bariloche and Villa la Angostura, both new to me as well. The plan was to land in Bariloche, get a car, drive through Ruta 40 to Villa la Angostura, visit the seven lakes, and spend the first night there.  This time of the year, the south of Argentina is stunning, all the colors come to life and the weather, even though still a bit cold, can be warm enough to lay in the sun in your bathing suit ( of course, I did just that).

To my surprise, Patagonia is one of the top places chosen by Israelis for vacation. Everywhere we went we ran into groups of Israelis of all ages. Actually, we even came to Bariloche with recommendations from Eran’s brother to eat at El Boliche de Alberto, where he had eaten the best meat in his life during his time traveling South America. Of course, we had to do that stop, we couldn’t disappoint hermanito. It’s not every day that an Israeli recommends you a parrilla in Bariloche.

The second part of the plan was Circuito Chico, a one-day drive where we visited Cerro Campanario, Llao Llao, Villa Tacul, Lago Escondido and last, but not least, my favorite spot of all, Cervecería Patagonia ( yes, the fact that I love beer might be the reason why it’s my favorite). But the views were also stunning, and also the cheese plate! We enjoyed all the food in Bariloche, and finally, after so many attempts, found the meat cut that Eran liked, finally! It was Ojo de bife. Thanks to Alto al Fuego for making Eran’s Argentina meat dream come true. Totally recommend this place, great service, food, and wine. One of my favorites in this trip.

Argentina, as always, didn’t disappoint. I showed my guest the beauty, and also the chaos of this amazing country and its people.We did so much more than what I’ve shared in this post, but for matters of writing best practices, I’ve limited to the above stories for now. We shared with family and friends, indulged in amazing food and Malbec, chanted with Racing’s fans, traveled in time by visiting places like El Zanjon, the Recoleta Cemetery, the Colon theater, jumped to the next door neighbor Uruguay and visited Montevideo, not only took a tango class but saw a great show at La Ventana, and even had time to go for a run in El Rosedal.

He’s definitely a fan of Argentina now, so I’m sure we’ll be coming back soon. Who knows? Maybe we’ll actually get to see Racing win, or at least score a goal.

View all posts by Melissa Narvaez